The Nazi Looting of Europe’s Masterpieces 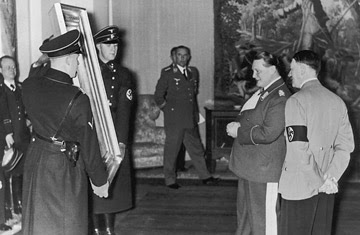 Release this week of the film, The Monuments Men, illuminates one of the darker aspects of the World War II in Europe—the systematic looting of art treasures from every country where the Nazis gained complete or partial control. I say systematic because there was nothing random about it. This crime against human culture was premeditated, meticulously planned, and carried out with utter ruthlessness.

The genesis of these crimes goes back to the character of the principal Nazi leaders. Adolf Hitler considered himself first and foremost an artist and a connoisseur of fine art. In his mad plans to make Germany the center of European government and culture, he conceived of a massive Führermuseum in his home city of Linz, Austria (then considered part of Greater Germany). Here would be stored and displayed all the major art treasures of the world. He began confiscating art objects from Germany’s Jewish citizens even before the beginning of the war.

Reichtsmarshall Hermann Goering, commander of the Luftwaffe and Hitler’s chosen successor, considered himself a Renaissance Man and coveted Europe’s fine art for his own enjoyment. Hitler put him in charge of the looting of Europe. Goering created the Reichsleiter Rosenberg Institute for the Occupied Territories (ERR) to carry out the looting. Leading Nazi Alfred Rosenberg was Goering’s deputy for this effort. Operational command went to Gerhard Utikal. The ERR became a massive, sprawling operation. Its units moved into Poland, Western Europe, and the Soviet Union close behind the conquering armies, seizing and cataloging every art treasure discovered. Heavy personal involvement in the looting by Goering assured that about half of the some 22,000 objects confiscated ended up in his private collection. Much went to other Nazi luminaries, such as Foreign Minister von Ribbentrop. Some of the looted treasures were put on display in Germany, but when the Allied bombing campaign became severe, most were secreted in bomb-proof storage, some in Berlin’s huge flak towers, others in underground salt mines.

Goering’s obsession on art theft directly affected the war with Russia. He was in Paris buying stolen art when the fateful 1942 decision to try to supply Stalingrad by air was taken. Because of his technical ignorance, Colonel General Hans Jeschonnek, assured Hitler that the Luftwaffe was up to the task. Goering knew better and was appalled to learn on the decision the following day. He was too afraid of Hitler to tell him the truth. 250,000 freezing, starving German soldiers died at Stalingrad.

After the invasion of Normandy and the breakout by George Patton’s 3rd Nazis began frantic efforts to get all the art remaining in France back to Germany. The French Resistance made superhuman efforts to keep these treasures in France. The 1964 movie, The Train, starring Burt Lancaster, first brought the art-looting problem to public awareness. It relates the efforts of French railway men to shuttle an entire trainload of French cultural wealth around France until captured intact by the Allies. The Monuments Men, the story of the Allies significant effort to rescue Europe’s cultural heritage, has the potential to educate a far wider audience of the sordid Nazi effort to lot the continent.

Note: Warren Bell is a historical fiction author with two novels released and for sale either for Kindle or in paperback from Amazon.com. Both are set during WWII, with Fall Eagle One taking place in Europe, and Hold Back the Sun is set in the war in the Pacific.

Posted by Warren Bell, Author at 11:10 AM No comments:

Another Voice of Anguish Stilled 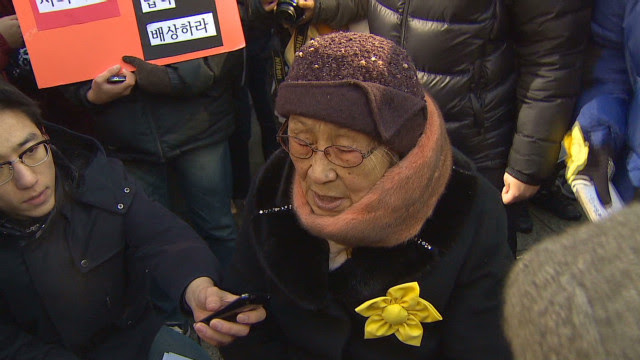 Last Sunday, Hwang Keum-ja, one of the few remaining Korean sex slaves of the Imperial Japanese Army (“comfort women”) passed away in a hospital in Seoul, South Korea. She died of lung and respiratory disease at the age of 89.

Forced into prostitution at the age of 16, Hwang was forced to serve in “comfort stations’ throughout World War II in several conquered countries. The life of these women can only be described as a living hell. On duty seven days a week, they were forced to have sex with as many IJA soldiers as showed up at the brothel. Hwang later said that she was unable to even stand up at the end of most weekends. She endured these torturous circumstances for several years before being abandoned in China at war’s end.

Making her way back to Korea, Hwang survived by collecting and selling garbage from the streets. Late in her life, she suffered hallucinations about being attacked in her home. She lived a life of great poverty, but this did not keep her from becoming one of the most outspoken advocates for the former sex slaves. Right up to the time of her death, Hwang regularly took part in demonstrations outside the Japanese embassy in Seoul demanding a formal apology from Japan and direct reparations to the individual women. There was precedent for their demands.

Early in the Pacific War, the U.S. government unconstitutionally imprisoned over 100,000 Americans of Japanese ancestry in internment camps. These citizens lost everything they had and had to endure concentration camp conditions for the remainder of the war. Nevertheless, thousands of the young men volunteered to serve in the U.S. armed forces. The army formed them into a segregated regimental combat team, the 442nd was the most decorated unit in the entire U.S. Army.

Later U.S. administrations recognized the horrible injustice visited on these Japanese-Americans. Congress passed a resolution of apology and appropriated funds to compensate the internees in part for their suffering. Today’s Americans are appalled that such a thing could have happened in our country. Over 200,000 Korean women were enslaved as IJA “comfort women.” Only 55 of these women are left alive. Hwang Keum-ja and her sisters are asking nothing more than what the U.S. provided to its internees.

My World War II novel, Hold Back the Sun, touches on the IJA sex slave system. A villainous Japanese officer plots to enslave the Dutch heroine as a “comfort woman” for causing him to lose face. He could not conceive of a more terrible fate. Neither could I as the author.

Note: Warren Bell is a historical fiction author with two novels released and for sale either for Kindle or in paperback from Amazon.com. Both are set during WWII, with Fall Eagle One taking place in Europe, and Hold Back the Sun is set in the war in the Pacific.
Posted by Warren Bell, Author at 5:05 PM No comments: