Can a Historical Novelist Do Too Much Research? 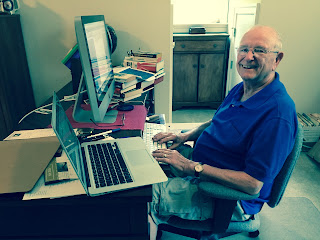 I once read that before beginning a historical novel, authors must immerse themselves in the history and culture of the period until they are essentially living there. I have often taken this admonishment to heart in my historical writing.


I love history and actually enjoy doing historical research. I like to root out the exact details of how history unfolded and later subject my characters to events as they really took place. This requires a lot of digging around in both the Internet and into printed material. I especially prize first-hand accounts by people who experienced the times about which I write. Sometimes, I buy used copies of the actual books to gain access to the information I seek. I recently purchased BARBED WIRE SURGEON, the memoirs of Dr. Alfred A. Weinstein, MD, a surgeon who served in the jungle hospitals during the defense of Bataan in 1942. When I write about my Navy Nurse protagonist working in these hospitals in my current project, ENDURE THE CRUEL SUN, I have the advantage of the point of view of someone who was there at the time. Nothing I could make up would be as horrible as the circumstances that actually took place.


My worktable is typically piled high with reference books. I also like to write on my big IMac desktop with my MacBook Air opened to Internet references beside it. When I need to insert a detail, I can usually get to it very quickly.


Lately, I have begun to believe that it is possible to do too much research. I am currently dealing with the Battle of the Coral Sea. This is not an easy battle to come to grips with. American Vice Admiral H.S. Duckworth described one day of the battle as, “Without a doubt…the most confused battle area in world history.” My challenge was to explain these circumstances to my readers in an interesting and entertaining way. (After all novelists are in the entertainment business.) I found myself reading Internet articles for hours, clicking on one link after another to dig for further details. Each question I answered seemed to raise several more. This created a problem as it broke the rhythm of my writing. I realized that I was actually enjoying my research too much. Research is, after all, a means to an end, not the end itself.


I recalled the old writer’s saw, “Don’t let the facts get in the way of a good story.” The story is paramount. The historical details are but the background against which the tale is set. I have to keep drumming this point into my head.


I’m trying now to limit my research to that necessary to get my basic story down in writing. I can always dig deeper during the rewrite and editing phases if I find that I need more detail.


I hope to soon get myself fully back on track, spinning stories of bombers diving on enemy carriers and submarines landing commandos on Japanese held islands. The yarn is all there, spinning around inside my head. All I have to do is get it down in type.

Warren Bell is an author of historical fiction.  He spent 29 years as a US Naval Officer, and has traveled to most of the places in the world that he writes about.  A long-time World War II-buff, his first two novels, Fall Eagle One and Hold Back the Sun are set during World War II.  His third novel, Asphalt and Blood, follows the US Navy Seabees in Vietnam.  His most recent novel, Snowflakes in July, is a Pentagon thriller about domestic terrorism.  He is currently working on a new novel, Endure A Cruel Sun, the sequel to his best-selling novel, Hold Back the Sun. For more about Warren Bell, visit his website at: wbellauthor.com or see him on twitter @wbellauthor.