Reprise: Thanksgiving in the 1940s 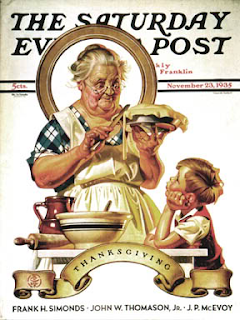 As my 81st Thanksgiving approaches, I cannot help but look back over the years at the changing role my wife, Annette, and I have played in this important family event. For many years, we enjoyed gathering the clan in our home and providing the feast, but our days of hosting Thanksgiving have faded into the past. We have reached the point in life where we go to our children’s homes for the celebration. Annette, however, still cooks her pecan and apple pies, which are a favorite with our grandkids. In the distant past, we went to our parent’s homes when circumstances allowed. But my Navy career offered few such opportunities, so we were used to decades of having everyone within reach come to our home. As I keep looking back, I am reminded of the blog post I wrote a few years ago about celebrating the holiday in the years right after World War II, when I was a young child. I am repeating it here.

In my childhood, Thanksgiving was truly a family affair. I grew up in a large extended family whose spiritual anchor was my Grandmother Tatum. A physically a small woman, to us Edna Tatum was an awesome presence. She raised five daughters (Brenda, Olive, Evelyn, Lorene, and Sadie) essentially alone on an isolated farm outside El Dorado in South Central Arkansas. Her husband, Miller, worked for the railroad and was away from home five days a week. This left Grandma to run everything, including supervising and feeding the hired hands who worked the farm. Miller didn’t move his family into town because El Dorado was a rough oil boom-town in those days. He felt his daughters were far safer out in the country.

After Miller’s death, Grandma sold the farm to Aunt Evelyn and her husband, Earl Molsbee, with the condition that she would always have a home there. So on Thanksgiving, the whole family less Lorene, who lived in far-away Batesville, gathered at “Aunt Evelyn’s.”
Ours was a strictly a blue-collar family. My Dad, Jewell Bell, worked as a planing mill foreman in a lumber plant. Besides running the farm, Uncle Earl worked in the oil fields. Leonard Goodnight (Brenda’s husband) worked at the local oil refinery. Ross Martin (Sadie’s spouse) served as a policeman. These men, all survivors of the Great Depression, were grateful to have jobs that let them put roofs over their families’ heads and food on the table. To them, Thanksgiving was not just a holiday. It was a celebration of the blessings they had enjoyed during the year.

In those days before television, the men usually sat around the wood stove in the living room and enjoyed each other's conversation. The hardest thing for the children was waiting for the meal. I was one of four sons who were always called, “the boys.” Gerald Goodnight was a few months older than my brother, Tom. Johnny Molsbee was a year younger. I was “tail-end-Charlie.” The one granddaughter, Darlene Molsbee, was about a year younger than me. She usually hung out with the women and helped with the meal. If weather allowed, the boys were banished to the outdoors. There was always lots to do and look at around the farm. I usually just trailed behind the big boys and tried to do whatever they did.

My mother and her sisters prepared dinner as a communal activity. Aunt Evelyn usually furnished the main dish, and the others brought their contributions, some already prepared, some to be finished just before eating. The menu was about the same each year. Turkeys were a luxury in those years just after World War II. Instead, the sisters baked or boiled chickens ahead of time. Making large pans of cornbread dressing with the broth, they would tear up the chickens into bite-sized pieces and embed them atop the breading, then bake the whole thing in the oven. Sometimes, we would have fresh pork roast and dressing as well. Cream gravy with the cooked chicken “giblets” chopped up in it went along with these dishes.

The rest of the menu was pretty traditional: mashed potatoes, home-canned Kentucky Wonder beans, candied sweet potatoes, fruit salad made by augmenting canned fruit cocktail with apples, oranges, and bananas, and jellied cranberry sauce. Desserts were all sorts of pies and cakes. My mother usually took a cake, since my dad preferred them to pies (except chocolate). My favorite was always the mincemeat pie. All this bounty would be spread on the big table in Evelyn’s dining room.

We always had a big turnout. Besides the sisters’ husbands, several other relatives usually came. One constant was Grandma’s younger brother, Johnny Ford. His son, Wilmot, frequently came also. Uncle Johnny, a widower who raised his son alone from infancy, was considered saintly in our family. He always offered the blessing before the meal. A Methodist, he never failed to enumerate the good things that had occurred in the previous year. Sometimes, this made the children impatient.

The dining room and table were too small to accommodate everything at once. As was customary in those days, the men ate first. According to how many were present, we children sometimes got to eat with the men. If there were too many, we were relegated to the “children’s table” in the kitchen. Either way, the women didn’t eat until everyone else was through. If they resented it, they never let on. I suppose they just took it as a matter of course. Things would change in later years.

The way we lived in the 1940s would probably be considered “poverty” by most of today’s young people, my grandchildren included. We had no computers, no television, not even electricity. Batteries powered our radios and listening time had to be rationed. Our homes were heated by wood stoves and lighted by kerosene lamps. Only those who lived in cities had running water and indoor plumbing. But that was how almost all people who lived in the country existed in those days. We did not consider ourselves poor. We were thankful for dry beds and full stomachs and loving families to care for us. Physical things didn’t seem to matter so much. The world has changed a great deal since the 1940s. Some of it is actually progress.

Posted by Warren Bell, Author at 4:06 PM 4 comments: Links to this post