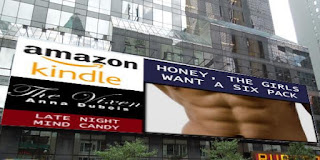 Just a few years ago, the requirements to be a cover model for romance books were long, flowing hair, a generally muscular build, and distinguished features. But sometime over the last few years, those characteristics became obsolete. What one needs today is a well-defined set of six packs. It seems as almost all romance book covers today feature a shot of a man’s bare body from just below the navel to the base of the neck. A handsome face is now superfluous. That ripped belly appears all that is necessary.

I should not be surprised. Several years ago I was with a younger group at a party. The women began talking about what attracted them to their husbands. Then a recent bride said something like, “Let’s face it, ladies. What’s really attractive about a man is a sculpted chest and belly.” Wow. And I thought good looks and intelligence were important. That shows how much I know. The proliferation of rippling bare bellies on book covers today would appear to prove that bride to be right.

Unfortunately, not all of us are blessed with a great six-pack, no matter how hard we work out. I did a Google search on the subject and learned that only about 1 in 25,000 men possess that characteristic. Let’s do a little math. The last Census says that there are about 152 million men in the U.S. If only 1 in 25,000 have a six-pack, that would mean that only about 6,100 American men qualify. Even if you double that number, only about 12,200 men with ripped bellies are available. I fear that women who expect potential mates to look like a book cover will be sadly disappointed.

Those of us who have been around awhile have learned that physical appearance is only part of the equation in choosing a mate. Intelligence, character, and integrity are way up near the top also. Not to mention pure, unadulterated love.  Some of us have been lucky enough to be blessed with all of these characteristics in the life partner with whom we chose to live out our lives.  I described my wife, Annette, as, “The greatest of many blessings that have graced my life,” in the dedication for my debut novel, FALL EAGLE ONE. I meant every word then and I still do.

For the record, I have a rock hard six-pack. I do over a hundred “crunches” a day and use the abs machine at the gym. Unfortunately, the years have layered a "keg" of fat over the muscles so that they are now invisible.

Posted by Warren Bell, Author at 8:56 PM No comments: