Today’s newspapers and electronic news media are constantly sending the message that the United States is threatened by terrorist activity. The Boston Marathon has been bombed. Police recently shot a man they had been tracking for terrorist actions. Reports of thwarted bomb plots are fairly frequent. One might easily believe that these are the worst of times concerning terrorism. But they are not. The highest incidents of terrorist attacks in the U.S. occurred during the 1970s. In a six-month period in 1971 and 1972, over 2,500 bombings took place in the U.S. The following chart from the Washington Post illustrates this point. 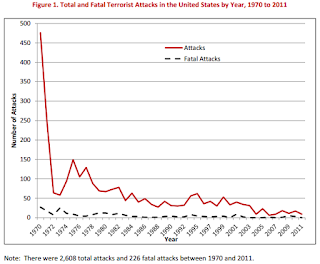 Why were the Seventies so violent? The turbulent Sixties spawned a number of groups seeking to impose their ideologies of the rest of the country through force and terror. The Ku Klux Klan, perhaps the largest and most long-lived terrorist group in U.S. history, was still attacking and sometimes murdering civil rights leaders. Some radical black power organizations declared war on the police. They began bombing police stations and shooting policemen and moderate African American leaders, whom they branded “Uncle Toms.” Puerto Rican nationalists, who had earlier tried to kill President Truman and had shot up the House of Representatives, carried out more bombings and shootings. They blew up the Mobil Oil headquarters and ambushed a U.S. Navy bus, killing some of the occupants. And then there were the terrorist groups spawned by the American New Left.

Perhaps best known of the New Left groups was the Charles Manson “family,” the murderers who massacred movie star Sharon Tate’s family and tried to kill President Ford. Also fairly well known was the Symbionese Liberation Army, principally because they kidnapped Patty Hurst and brainwashed her into helping them rob a bank. They also assassinated moderate African Americans. Less well known to the general public was the Weather Underground or Weathermen. The Weathermen espoused the violent overthrow of the U.S. government and replacing it with a Marxist society. Terror was their weapon of choice. One of their leaders admonished them to be “crazy MFs and scare the hell out of honky America.” The Weathermen exploded bombs in police stations and government buildings, including the State Department and the Senate Office building. Weathermen also conducted an infamous armored car robbery. Fortunately, the deaths of some of their bomb makers in an accidental explosion hindered their bombing campaign.

Author Bryan Burrough recently chronicled New Left terrorist activities of the 1970s in Days of Rage. Anyone doubting the seriousness of the situation in those years can become informed by reading his book. Burrough considers the subject of his work to be an oddly neglected part of American history.

Why are the Seventies terrorists below the level of consciousness of most Americans? I believe that the earth shaking political events of the period—the impeachment and resignation of a President and the Fall of Saigon—forced domestic terrorism to the back pages of newspapers. The 24/7 news cycle did not exist at that time. If it had, might our collective memories be different?

My upcoming novel, Snowflakes in July, is set during the turbulent Seventies. The story traces the formation and operations of a terrorist group with ambitions to steal U.S. Navy nuclear weapons. Will the Navy be able to counter the plot? Chapter 1 of Snowflakes in July will be available on my website next month.


Note: Warren Bell is a historical fiction author with three novels for sale either for Kindle or in paperback from Amazon.com. The first two are set during WWII, with Fall Eagle One taking place in Europe, and Hold Back the Sun set in the war in the Pacific. His third novel, Asphalt and Blood, covers the U.S. Navy Seabees in Vietnam.

Posted by Warren Bell, Author at 4:42 PM No comments: