Haunting Melodies From The Past 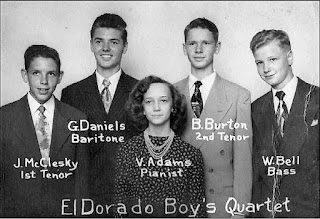 A couple of weeks ago, I received a pleasant surprise from my older brother, Tom.  While reading the online version of our hometown newspaper, he had come across a "blast from the past" photograph of the boy's gospel quartet in which I sang over sixty years ago. As I viewed those youthful faces, memories of the time we four fledgling musicians spent together flooded my mind. We had quite a ride for a group of early teenagers.

We were still in the eighth grade at Southside Elementary School in El Dorado, Arkansas, when my friend, Johnny McCleskey, approached me about joining the quartet he and Glenn Daniels were putting together. My voice had changed early, and I had been singing bass in our church choir for over a year. The quartet sounded like fun, so I signed up. That would be my only gig in the entertainment business until I became an indie author decades later.

I soon learned that the quartet had been Glenn's idea. His grandmother was a lover of gospel music, and she had passed that love on to him. He became our lead (melody) singer. Johnny, who was a piano prodigy, would be our first tenor. His voice had not yet changed, so he could soar to high notes the rest of us could not even imagine. Our friend, Bill Bruton, was our second tenor. I sang bass. Being able to belt out notes below the bass cleft surprised many listeners. All four of us had music training. Not much rehearsal was needed before we really clicked and started blending well. At first, Johnny both played the piano and sang, but Virginia Adams, a talented pianist a little older, soon joined us as our accompanist. Johnny's and Virginia's fathers became our transportation and informal managers.

Our El Dorado Boy's Quartet cut its teeth at country singings. The "all day singing with dinner on the grounds," sometimes called conventions, were a cultural icon among the southern evangelical churches of the time. Hundreds of people would gather in churches or outdoor settings to participate in group singing from Stamps-Baxter Music Company songbooks. Amateur directors took turns leading the music. Quartets sang between sessions of crowd songs. The participating women would serve a sumptuous "pot luck" meal, spreading the food on picnic tables beneath shade trees and covering it with dishcloths to keep away the flies. Larger conventions were sometimes held in available auditoriums.

Our "big break" came late in the summer of 1950 when we entered a quartet contest held on the stage of the Louisiana Hayride in Shreveport, LA. The winning quartet from each of the tri-state area—Arkansas, Louisiana, and Texas--selected based on an applause meter reading. All the other quartets from Arkansas were adults, some long established. After our introductory song, Johnny's dad jumped us for being too stiff in our posture. He told us to, " Get into the music."  Our competition number was a song called, "I've Got That Old-Time Religion In My Heart," which had a high tenor solo at the end. As Johnny's voice soared up to the high climax, he did a little dip and spread his arms widely. The audience went crazy, bursting into thunderous applause. The applause meter went to the highest reading of the night. That won us an all expenses paid trip to Nashville, TN to sing in the Ryman Auditorium on Wally Fowler's All-Night Singing, broadcast on WSM every Friday night. The Grand Old Opry occupied the same stage on Saturday nights. We were to sing there long before either Johnny Cash or Elvis Presley.

The long road trip to Nashville was quite an adventure for small town kids. I rode with Johnny's dad. We took some picnic food and sometimes ate in restaurants. I can't recall the name of the hotel at which we stayed, but it seemed palatial to us. We were excited to see some of the stars of the Grand Old Opry staying there with us.

The Ryman Auditorium proved a disappointment. I believe that it was an old revival preaching venue. Old church pews made up most of the seating. The entire building had a neglected, dusty air about it. After several hours of listening to others sing, we became a little disappointed. We finally got to perform at 1:30 a.m. on Saturday morning. Our families and friends back home stayed up late to hear us.

Winning the contest also won us a 30-minute radio show on Sunday mornings in El Dorado. We had pretty good ratings for a while. We sang together for another year or two, performing at events around the area. But when we got to high school, forces began to pull us apart. I went to work for Safeway, intent on saving money for college. Glenn became a regular DJ on a local radio station. Johnny and Billy pursued their own interests. Virginia married right after she completed high school. I don't think we ever officially dissolved.

All the guys except me pursued careers in the field of music. Johnny paid his way through Loyola University in New Orleans playing jazz piano on Bourbon Street. He later owned nightclubs in several cities under the nickname of "Johnny Mack." Under the sobriquet of "Big Daddy" Daniels, Glenn became a famous DJ and producer in Dallas, TX. He founded the cable network, Country Music Television. Billy studied music in college and became a teacher. Although I studied engineering in college, I sang in church and college choirs, gravitating toward more classical music. After receiving my Bachelors and Masters degrees in Civil Engineering at the University of Arkansas, I had the Draft breathing down my neck. I joined the U.S. Navy Civil Engineer Corps, intending to stay for my three-year obligation. I had so much fun that I stayed twenty-nine years.

Johnny and Billy and I got together in 2004 at our 50th High School Reunion. Glenn had died young at age 56. We enjoyed reminiscing about our quartet years. Johnny died soon afterwards of a stroke. Only Billy and I are still around, and I have lost touch with him. Someday, perhaps we'll get to perform "I've Got That Old Time Religion In My Heart" in an angel choir.