Seabees - Can Do! Happy 75th Birthday to the Navy's Seabees. 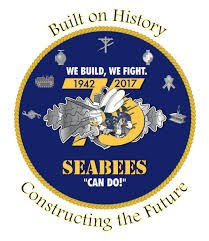 March 5th is the 75th birthday of the U.S. Navy's Fighting Seabees. Born of the need for uniformed construction experts to build essential naval and air bases in the far-flung Pacific War, the new builder/warriors quickly made themselves indispensable to military commanders in all theaters of war. Seabees laid the floating causeways that made the invasion of Sicily possible. They built artificial ports and operated "Rhino Ferries" at the beaches of Normandy. They even ferried troops across the Rhine into Germany.

But it was in the Pacific where the Seabees made their biggest contributions. Beginning with Guadalcanal, every amphibious operation of that vicious war saw vital work by the Seabees: hundreds of airfields and ports, thousands of miles of roads, thousands of prefabricated "Quonset huts," hospitals, mess halls, and berthing facilities. Seabees built the runways from which B-29s pounded Japan and from which the Enola Gay brought ultimate destruction to the enemy.

Most people don’t realize it, but many of the characters in the famous musical, South Pacific, are Seabees. The author, James Michener, featured Seabees prominently in his breakthrough novel, Tales of the South Pacific. One of his nineteen tales deals exclusively with a Seabee battalion planning and constructing an airfield on a tropical island. It may well be the finest piece of fiction ever written about the Seabees in their long history.

Recruited from the civilian construction trades, many World War II Seabees were much older than their official records indicated. Marines were known to quip, "Never hit a Seabee. He may be some Marine's father." The Marines' ultimate compliment may have been the sign they posted on Iwo Jima:

"And when we reach the isles of Japan,
With our hats at a jaunty tilt,
We'll enter the City of Tokyo,
On roads that the Seabees built."

Seabees have enhanced their reputation in every conflict since their birth. Their floating causeways made the daring invasion at Inchon in Korea possible. Thousands of Seabees built bases, airfields, fire bases, roads, and hospitals all over Vietnam. The wars in the Middle East again demonstrated how vital these builder/fighters have become to American Military operations.

So Happy Birthday, Seabees! May your endeavors continue to inspire.

My third novel, Asphalt and Blood, tells the tale of Seabees in the 1968 Battle of Hue City. Although fictional, many of the characters are composites of real individuals and most of the seemingly-outrageous incidents in the novel did occur.