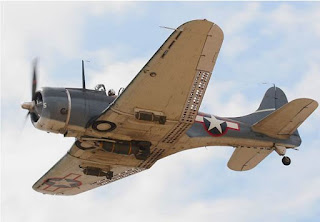 Mention dive-bombers in any gathering of World War 2 enthusiasts, and you will instantly conjure up images of the ugly, bent-wing Ju88 Stuka, the German Luftwaffe’s primary close-support aircraft. Fighter pilots will sneeringly call dive-bombers, “A fighter pilot’s dream,” because they believe they are easy to shoot down. Very few people in and out of the military are aware of the critical role that dive-bombers played in winning the Second World War for the Allies.

The term, “dive-bombing,” is precisely descriptive. To execute such an attack, a pilot flying at an altitude of anywhere from 10,000 to 20,000 feet altitude puts his aircraft into a steep dive and aims it directly as the target. U.S. Navy procedure called for a 70˚ dive. German and Japanese aircraft were limited to 65˚ dives. Using special dive brakes to maintain control during the high-speed dive, the pilot drops down to 1,000 to 2,000 feet above the target before pulling the his bomb release. As the bomb rotates out on its “crutch” to clear the propeller and falls away, the aviator pulls back on his controls, experiencing a force of six times normal gravity as the plane levels out at low altitude. Five seconds or less after bomb release, it strikes the target. The bomb has been controlled by the pilot’s brain to within seconds of impact.

Dive-bombing was first tried above the trenches in WW1. Heavy losses of aircraft and aircrew discouraged widespread adoption of the technique. European air forces largely ignored the concept in the interwar years. But as carrier-borne naval aviation developed rapidly in the 1920s, naval air forces revived the idea. Hitting a fast-moving and maneuvering ship in the open sea presents a complex problem. With both aerodynamic and weather forces acting on both aircraft and missiles, hitting a moving ship from a horizontal bombing position remained an unlikely proposition. The USN pressed forward with development of dive-bombers to solve the problem.

In 1931, the famed American Director, John Ford, released a film called Helldivers. Clark Gable and Wallace Berry portrayed two chief petty officers that flew dive-bombers. A typical Hollywood action film of the time, it did feature American naval aviation at that time and brought dive-bombing to the attention of all naval powers. That same year, the Imperial Japanese Navy (IJN) issued its specification for a carrier-based dive-bomber.

At the 1931 Cleveland Air Races, German ace Ernst Udet observed a dive-bombing demonstration by Helldivers. The concept soon enthralled him. He convinced his WW1 commander, Hermann Goering, to buy two export versions of the Curtiss F11C-2 Goshawk Helldiver, for evaluation by the fledgling Luftwaffe. Later put in charge of aircraft development by Goering, Udet ordered that all German bombers be capable of dive-bombing. This requirement hindered development of a strategic bombing force in the Luftwaffe.

The spectacular successes of Germany’s Panzer columns operating with continuous dive-bomber support are a matter for separate discussion. The dive-bomber’s critical contributions to final victory were in the realm of naval warfare. Dive-bombing proved key to successes of both the USN and the IJN during the Pacific War.

In 1941, over half the aircraft on USN carriers were SBDs (Scout-Bomber-Douglas Aircraft) Dauntlesses. Thirty-six SBDs were divided into two squadrons, a Scouting squadron (VS) and a Bombing squadron (VB). In practice the squadrons were used interchangeably.

For a plane approaching obsolescence in 1941, the Dauntless was a remarkably capable warbird. Thirty-three feet long with a wingspan of almost 42 feet, the SBD had a 1,200 horsepower, 9-cylinder radial engine. It had a range of over 1,000 miles and aerodynamically pleasing shape. A long greenhouse canopy housed the pilot and radio operator/gunner. A 1,000-pound bomb could be carried on a “crutch” beneath the fuselage, and hard-points on each wing could bear 250-pound bombs. A typical combat load was either one 1,000-pounder or one 500-pounder and two 250-pounders. The Dauntless had a significant gun armament. The pilot controlled two .50-caliber machine guns firing through the propeller. The rear gunner had a pair of .30-caliber guns on a flexible mount. The pilot’s guns actually outranged those on a Japanese Zero fighter. The Dauntless was even frequently used in combat air patrol situations against slower torpedo bombers. It had a combat kill ratio of 3.2 to 1—better than some fighters.

In the first year of the Pacific War, SBDs sank six aircraft carriers, one battleship, three cruisers, a submarine, and fourteen transports, approximately 20 percent of IJN prewar tonnage. Of IJN warship losses during the Pacific War, dive bombers sank over 170. Submarines accounted for another 140 sinkings, and surface ships about 40 others.  Dive-bombers thus proved crucial to final victory by the USN.

SBDs will figure prominently in my next two novels about the Pacific War. I am currently writing about the Battle of the Coral Sea in Endure The Cruel Sun, sequel to my bestselling novel Hold Back the Sun. The Americans have just found the IJN light carrier, Shōhō.  Japan has won every battle to date. How will this one turn out?

Warren Bell is an author of historical fiction.  He spent 29 years as a US Naval Officer, and has traveled to most of the places in the world that he writes about.  A long-time World War II-buff, his first two novels, Fall Eagle One and Hold Back the Sun are set during World War II.  His third novel, Asphalt and Blood, follows the US Navy Seabees in Vietnam.  His most recent novel, Snowflakes in July, was released on September 15, 2015.  He is currently working on a new novel, Endure The Cruel Sun, the sequel to his best-selling novel, Hold Back the Sun. For more about Warren Bell, visit his website at: wbellauthor.com or see him on twitter @wbellauthor.
Posted by Unknown at 9:48 PM